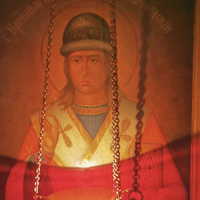 Memorial day on February the 13th

The Near caves of the Lavra don’t contain holy relics of the venerable Nikita, but one can see till now the place where the solitude cell of the saint was located.

The foremost esteem is accorded to brave soldiers who aim directly at the enemy with individual valour rather than battle in a regiment.

The Lord often permits that soldiers experience a temporary fall in spiritual warfare, so that they do not exalt themselves.

The blessed Nikita of the holy Cave Monastery was one of such valiant warriors of Christ.

In the days St Nikon’s abbacy, Nikita lived at the Cave Monastery.

He repeatedly begged the abbot to bless him for struggle in solitude as a recluse. The abbot refused saying,

‘Child, it is not beneficial for a young monk to be idle. It is better for you to be with the brethren, to work together and God will not deprive you of your reward.

You are aware of how our brother Isaac the recluse was deceived by demons in the caves. It was only God’s grace and help, provided for the sake of the prayers of our holy fathers Anthony and Theodosius, that saved him.’ Nikita responded, ‘Father, I will never be deceived by any such a thing. I am determined to stand firmly against the demonic traps. I will pray to our man-loving God that He grants me the gift of wonderworking as He granted it to Isaac.’

The abbot warned him once more, ‘Your desire is ahead of your strength; watch, child, that you do not fall before you ascend. I give you the obedience of serving the brethren and you will be crowned by God for that.’

Nikita would not heed the abbot’s words, for he could not resist his powerful zeal for seclusion. Thus, he acted according to his own will. The young monk shut himself in a cell in the caves, barred the door firmly and refused to come out. He remained alone in prayer.

It was not long, however, before he fell into satan’s nets. As he was chanting, he heard a voice as if someone was praying together with him. Nikita also smelled ineffable fragrance. Falling into prelest (delusion) he said to himself, ‘If it were not an angel, he would not pray with me, and this fragrance can be nothing else but the fragrance of the Holy Spirit.’

With these proud thoughts in his mind he began to pray, ‘Oh Lord! Appear to me by Yourself so that I could see You.’

A voice responded, ‘I will not appear to you for you are very young; you might become haughty and then fall down.’ The recluse tearfully pleaded, ’Oh Lord, I will never be deceived, for the abbot has taught me not to heed demonic deception; I will fulfil all that You order.’ 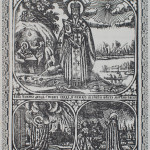 Thus, the demon gained power over the monk and said, ‘It is not possible for a person, still in the flesh, to see me; but I am sending an angel who will stay with you. Do his will.’ Immediately, a demon in the image of an angel appeared there in the cell. Nikita fell down to the floor and reverenced to the demon. The demon said to him, ’From now on spend your time reading rather than praying. Not only will you be conversing with God, but you will also be able to give beneficial counsel to those coming to you. I shall always pray to the Creator for your salvation.’

The recluse believed all the demonic words and firmed even more in his prelest. He ceased to pray but read books diligently in the cell. Meanwhile, he saw a demon in the angelic image praying for him and rejoiced that the angel was doing all the praying for him. Soon, Nikita began to converse with visitors and give them counsel beneficial for their souls. He began to prophesy and the fame spread about him; the accuracy of his prophetic words amazed the visitors.

Once the monk sent a message to Prince Izyaslav saying, ‘Today, Prince Gleb Svyatoslavovich has been killed in Zavolchie; send your son Svyatopolk to take the throne of Novgorod immediately.’

The death of Prince Gleb had occurred exactly in accordance with Nikita’s prophecy. Since then, the recluse was known as a prophet and the princes and nobles consulted him.

Nikita knew the books of the Old Testament in detail, but he did not know the Scriptures from the Gospel and Apostle, and did not wish to read or even hear of them. Thus, the fathers knew that he was in the power of a demon. After much praying, a group of fathers consisting of Sts Nikon the abbot, John, who later became an abbot, Pimen the Faster, Isaiah, bishop of Rostov, Isaac the Recluse, Agapitos the Healer, Gregory the Wonderworker, Nicholas, bishop of Tmutarakan and others, prayed together for a long time and chased the demon away from Nikita.

When the rescued monk was taken out of the cave, it turned out that he no longer knew anything from the Old Testament and was illiterate indeed; he could neither read nor write. When Nikita recovered, he confessed his sin and gave himself over to great restraint and obedience so that he grew in true virtue.

The merciful Lord considered the efforts and virtues of His servant and accepted his repentance. As well as Peter, who had thrice renounced Christ, repented and afterward received the charge from the Lord,  Feed my sheep, Feed my lambs, Feed my fouvourites, St Nikita was now called to the episcopate. He was consecrated bishop of Novgorod and God glorified him with the gift wonderworking. Many great miracles were worked through his prayers.

Having thus tended the rational flock well, St Nikita departed to the Lord and, as one tempered like gold in the furnace, he received a crown of eternal life. May the Lord make us worthy of the crown by prayers of our holy father Nikita. Amen.