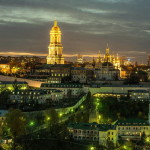 On the so-called territory of the Upper Lavra, the National Historical and Cultural Preserve operates, and the monastery acts on its Lower part, where the monks live and prayers are daily offered up.

The contemporary Kiev-Caves Lavra and a few buildings of the former Lavra guest house are situated on the territory of the Near and Far Caves.

When entering the Gates of the Caves, we see the street along the monastery garden laid out on both sides of the arcade gallery roofed by the grape-vine.

From the upper point, a picturesque view opens on the monastery garden with alvearies, the Dnieper river and its left shore. 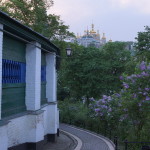 In the second half of the 17th century, the covered gallery paved its way from the Near Caves to the Far Caves similar to that from the Upper Lavra down to the Near Caves. Continuing lines of the Caves’ hills, the galleries emphasize and supplement the beauty of the Lavra landscape.

Whatever the weather is, it is safe to overpass the steepness of the Lavra slopes the under these arch coverings, and to admire the nature and architecture of the holy sanctuary. In 1869, the gallery connecting the Near and Far Caves was rebuilt under the project of monk Eucarpius and since then no notable changes were made. 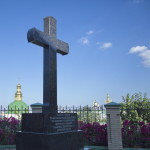 Let us walk down the monastery garden and make a stop in front of the memorial cross built in memory of the 2000th anniversary of Christ Nativity to see the panorama of the Lower Lavra. There is a wide overview of the territory of the Near and Far Caves.

In the core of the hill, where we overlook the surroundings, the Near or Anthony’s Caves lay under the garden; the Far or Theodosius Caves are inside of the opposite hill farther from the Great Church.

Enjoyed by the beauty of the land-based part, let us with the greatest venertion go down to those holy places which have given spring not only to the Kiev-Caves Lavra but also served as the cradle of the monasticism in Holy Rus.

The Caves of the Kiev-Caves Monastery are the main place where all the pilgrims, tourists and merely the curious come together. 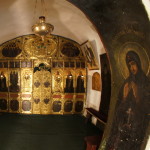 The Far and Near caves were dripped all over by the founders of the monastery almost a thousand years ago and named after these founders, Anthony and Theodosius. First, the brethren of the monastery lived and carried their obedience in these caves, but thereafter the buildings for the brethren and the churches were constructed.

The establishment of monastic life under the shared household order has began.

Nowadays, over hundred and twenty God pleasers stand invisibly with their relics in the Lavra Caves with us in prayer. God has wisely managed that before being able to pray the venerables of the Caves and be near their relics, perceiving the beauty of their spiritual achievements with one’s heart, one can observe the outer grandeur and beauty of the monastic home. 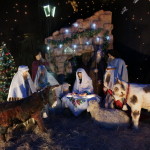 As a rule, acquaintance with the sanctuaries of the Lavra begins with its upper part on the ground.
The Church of the Exaltation of Cross and the Church in honor of all the Venerables of the Caves, latter also called the “Warm”, stand over the Near Caves. On the square, in front of Anthony’s Caves the crib is placed as the traditional Christmas time attribute. It is here however all year long and reminds us all how the earthly life of Christ the Savior begins.

Christ starts His earthly path in the Nativity Cave, and so does the Holy Kiev-Caves Lavra. Its existence began as the Divine Providence, and was foreseen by Apostle Andrew, when the Holy Spirit led the praying monks to the Caves of the Kiev Hills to perform their acts of spirit. 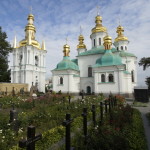 After passing from the Near Caves to the Far Caves through the gallery, we see the Anne’s Conception Church right above the Far Caves, and the Church of the Holy Theotokos’ Nativity (the Academic Church), on the place where the first wooden church in honor of the Dormition of the Most Holy Theotokos stood over a thousand years ago.

On the territory surrounding the Church of the Holy Theotokos’ Nativity, there is the monastery’s cemetery, where not only monastery inhabitants of different times, but also the eminent statesmen found their final resting place. Pilgrims also come here to honor the cherished memory of the Primate of the Ukrainian Orthodox Church in 1992-2014, His Beatitude Metropolitan of Kiev and All Ukraine Vladimir (Sabodan) who rests in peace with God. 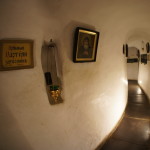 Between the Near and Far Caves, in the lowest point of the Lavra, there are the water wells of holy Anthony and Theodosius as well as the Church in honor of the Mother of God “Live-Giving Spring” Icon, where the cap as sanctuary belonging to one of the most famous Caves venerables Mark the Grave-Digger is now kept.

Besides, among the saints of the Kiev-Caves Lavra we meet such great me of faith as venerable Barlaam of the Caves being the second hegumen of the monastery, venerable Agapitus the Gratituous Doctor, venerable Nestor the Chronicler, venerable Elijah of Murom City and other numerous saints, who deserved such grace with their virtuous lives, so that now they are in the home of the Heavenly Father and pray about all asking their protection.

Near the entrance to the Lower Lavra (near the last stop of the public transport), there is the memorial of venerable Nestor the Chronicler. Namely in the Lavra, the memorials of the founders of the monastery, vnerable Anthony and Theodosius of the Caves, and to saint equal-to-the-Apostles Cyril and Methodius the enlighteners of the Slavs, to Sanctifier and Metropolitan of Kiev Petr Mohyla are built. 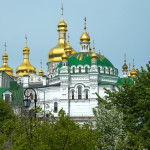 If we go from the street under the Holy Gate of the Trinity or bypassing the All Saints Church, or through the Caves’ South Gate from the Lower Lavra, we can reach the so called Upper Lavra.
Besides the numerous museums on the Territory of the Upper Lavra, the magnificent Dormition of the Most Holy Theotokos Cathedral and the Church of Venerable Anthony and Theodosius of the Caves with the Refectory Chamber are located nearby. Perhaps, each who has visited the Kiev-Caves Lavra for the first time or is the standing attendant strives to spend time there. These grand churches are open during the Divine Services according to the schedule.

Other ancient churches standing on the upper territory (the Over-Gate Church in the name of the Holy Trinity and the All Saints Church above the Economical Gate), also the Lavra Bell Tower are not always open for performing Divine Services, for pilgrim group visits or the faithful, and some of them are open only once or several times a year on the dedicated or other feasts.
There is no need to go far in order to understand all the greatness of the architectural ensemble, the composition of placing ancient and reconstructed buildings of the monastery. The sightseeing platform is very close to the Refectory Church, where a wonderful view is unveiled to the territory of the Lower Lavra and the left shore of the capital.

Every year in different times, exhibitions and fairs take place on the territory of the Lavra, devoted to various great Christian feasts: the feast of Protection of the Holy Theotokos, Christmas, Presentation of the Lord in the Temple (Candlemas), Annunciation and other. 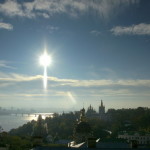 The Lavra is always ready to meet and console each heart which searches the truth. The Caves and the churches open their doors to all who strive for salvation and eternal joy. We believe that God preserves the ancient monastery till the end of time under the protection of the Most Holy Mother of God reigning the Kiev-Caves Monastery and upon the prayers of God pleasers of the Caves!