Vicegerent of the Lavra metropolitan Pavel 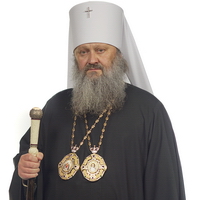 Metropolitan Pavel of Vyshgorod and Chornobyl

Father Superior of the Holy Dormition Kiev-Pechersk Lavra since the 30th of March, 1994

Vicegerent of the Holy Dormition Kiev-Caves Lavra metropolitan Pavel of Vyshgorod and Chornobyl, Vicar of Kiev Metropolitan and All Ukraine, the Head of the Commission on Monasteries of Ukrainian Orthodox Church (Lebed Petr Dmitrievich) was born on the 19th of April, 1961 in the village of Borbin, Malynovsky district, Rovno region. After finishing school he studied at Lutsk Trade College in 1978-1980.

On the 7th of January, 1988 he was ordained him to the office of a priest.

In 1989 he was tonsured to monastic rank and was given the name Pavel (in honour of Supreme St. Apostle Pavel).

In 1992 he was consecrated to the office of an archimandrite.

On the 30th of March, 1994 he was appointed the Father Superior of the Holy Dormition Kiev-Pechersk Lavra.

In 1996 he graduated from the Kiev Theological Academy.

In 1997 chaired the Commission of Holy Synod on Monasteries of Ukrainian Orthodox Church.

In 2003 he was consecrated to the rank of Archbishop and in 2011 – metropolitan.

On the 29th of January, 2010 he was included to the Commission on Interconciliar Presence of Russian Orthodox Church on organization the lifestyle of the monasteries and monkhood.

He is awarded to such rewards of Ukrainian Orthodox Church:

He is awarded to such rewards of Russian Orthodox Church:

He is awarded to such rewards of thу other Orthodox Churches:

He is awarded to such state rewards: