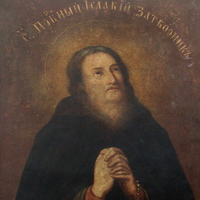 Memorial day on February the 27th

As far as we know, Isaac was the first person in the Northern lands to enter the path of foolishness for Christ’s sake. Throughout his life, we also received one of the earliest revelations in Rus’ about the special deceit of satan called ‘spiritual delusion’ (plani in Greek; prelest in Slavic).

Isaac lived in the late eleventh century. He had been a wealthy merchant in the city of Toropets before he felt a strong call for his property to the poor, came to St. Anthony’s cell and asked the elder to tonsure him. Foreseeing his virtuous angelic life, St. Anthony agreed to tonsure the young man.

The new monk donned a hair shirt under his cassock and led a strict ascetic life. Later, the saint took a fresh goatskin, made a tight jacket, and wore it over the hair shirt until it dried on him. Thus, the monk struggled against his passions.

St. Isaac sought and obtained the elder’s blessing to live in reclusion. He locked himself in a small cave about two square metres large and prayed to God there with tears. He only had a day-old prosphora and some water as his daily meal. St. Anthony himself used to bring these meagre provisions to him, passing them through a window, so small that a hand could barely enter it. 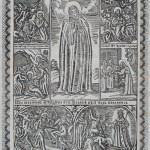 St. Isaac spent seven years in reclusion never coming out into the light. He never lay down, but he only fell into a brief sleep while sitting. At night, he began to make prostrations continuing them until midnight, when he became weary and sat down.

For the instruction for other monks and for reasons, known to God alone, He allowed the satan to deceive Isaac. This occurred as follows:

Once Isaac was seated resting in his cave, and his candle had already gone out. Suddenly, the cave became illuminated with a bright light. Two radiant figures walked in; their faces shone like the sun. ‘Isaac!’ they said, ‘We are the angels of Christ and He is coming here! Bow to Him!’ The saint did not recognize the demonic activity and, thus, he did not guard himself with the Cross. He walked up and bowed down to the ground before the approaching figure, as if before Christ Himself. The demons cried out, ‘You are ours, Isaac!’ and with that they led him outside into the main cell and seated him. Then, the whole cell and even the corridor of the cave became filled with these ‘angels’. The demon which had appeared as Christ said, ‘Take pipes, cymbals and psaltery, and play, let Isaac dance for us!’ And they began to play. They exhausted Isaac so much that he was hardly alive. When he reached the state of total collapse, the demons sneered at him and left the cell.

At dawn, when it was time for breakfast, St. Anthony came as usual to Isaac’s window and said a prayer. There was no response from inside, and St. Anthony surmising that the ascetic had reposed sent to the monastery for St. Theodosius and the brethren. They broke open the cave and carried Isaac out thinking that he was dead. However, when the brothers brought him out into the daylight, they noticed that the monk was still alive. ‘This is the work of demons,’ said St. Theodosius and they put Isaac to bed in one of the monastery cells.

St. Anthony took care of the blessed ascetic by his own hands. When he was exiled to Chernigov in 1068, the abbot, St. Theodosius, brought Isaac into his own cell to look after him. St. Isaac was in such a state of collapse that he lay unable to move or even to speak for over two years. Because he lay constantly on one side, worms had developed under his hipbone several times. St. Theodosius cleansed the ill and washed him by his own hands. The gentle abbot prayed constantly for Isaac’s recovery.

During the third year, Isaac began to speak and hear. At length, he began to walk slowly, as if he were a child taking first steps. He did not wish to go to church, but the monks took him there by force. Later, they taught him to walk to the refectory. He did not touch any bread until it was placed into his hand. Finally, St. Theodosius said, ‘Let him learn to eat by himself.’ For a week Isaac did not take bread. Then, little by little, looking at the others, he learned to eat. So, gradually, he recovered from the terrible shock.

During the tenure of Abbot Stephen, who succeeded St. Theodosius, Isaac recovered completely from his illness and began to lead a strict life again. He did not return to the cave but obtained the elder’s blessing to undertake the struggle of foolishness for Christ’s sake, instead. He put on his hair shirt under an ordinary peasant shirt again. His shoes were completely worn out.

Isaac was assigned to obedience in the kitchen as a cook’s assistant. Each morning, he arrived much earlier to the church than everyone else and stood motionless through the entire service. After the morning service, he hurried to the kitchen to prepare the fire.

One of the cooks, whose name was also Isaac, often laughed at the fool and tormented him. Considering Isaac to be a complete moron, the cook once pointed to an empty spot and said to the fool, ‘Isaac, there is a raven sitting there. Go and catch it.’ Blessed Isaac bowed to the tormentor, went to the indicated spot and, Oh wonder of God, in full view of everyone he returned with a raven in his hands. The cooks were stricken with fear and amazement, and reported the incident to the abbot and brethren. From that time on, the brothers began to show a marked respect for Isaac. Fearing worldly glory, the fool began to behave even more foolishly and to provoke the abbot and brethren to such a degree that he was often reviled or even beaten.

During the abbacy of St. Nikon, Isaac settled in St. Anthony’s cave again and enhanced his exploits in his own way. He dressed boys coming to his cave in monastic rags. He suffered from both the abbot and the parents of the children for such tricks. In this way, the saint grew in patience for he endured everything meekly – the blows, the revilement and the cold which cut through his scanty clothing and worn shoes. One night, he kindled the stove in his cave. Since the stove was in poor condition, the flames began to make their way through the cracks in its top. As he had nothing to close the cracks with, Isaac stood on them with his bare feet and did not step off until the stove had entirely burned itself out.

‘There were many more miraculous stories told of him,’ wrote St Nestor the Chronicler, ‘and I witnessed some of them myself.’

St. Isaac finally attained such power over the demons that he set at nought their apparitions and terrors. He met them as flies saying to them, ‘You deceived me before in the caves because I did not know your cunningness. Now, my God, Jesus Christ the Lord is with me and so are the prayers of my father Theodosius; with their help, I hope to defeat you.’ The demons nevertheless did him much evil. ‘You are ours,’ they retorted, ‘you bowed to our elder and to us!’

‘Your elder is the enemy of Christ and you are demons,’ he replied guarding himself with the sign of the Cross. At this they disappeared. Sometimes, they came back at nights and, trying to overcome him with fear, they appeared as a crowd with pickaxes clamouring, ‘Let us dig out this cave and bury this man here alive!’ On the other hand some of them pretended to be sympathetic and called out to him, ‘Escape, Isaac, they want to bury you.’ 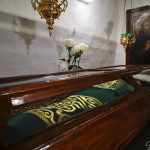 But he would reply, ‘If you were good you would come during the day, but you are darkness, you walk in darkness and darkness will take you away.’ At this, he crossed himself and the demons disappeared. Finally, he attained such complete command over the demons that they left him alone and disturbed him no more. He himself said that the struggle continued for three years.

St. Isaac spent his last years of life in a very strict continence, fasting and vigil. When he became ill in the cave, the brothers took him out to the monastery and he reposed eight days later, on February 14 (27 New style), 1090, in the abbacy of Abbot John. The Holy Church commemorates St. Isaac on the date of his repose. The relics of the saint rest open in St. Anthony’s cave.