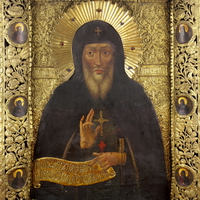 There are several opinions on the point, when Venerable Anthony settled in one of Varangian Caves, which compose the part of the present Far Caves. But the majority of the scientists relate this event to 1051. And the very date is considered to be the date of foundation of the Pechersk monastery.

When 12 monks gathered around Venerable Anthony, new cells were built and rebuilding of the present Far Caves began.

In 1057 Venerable Anthony, striving for seclusion, appointed Venerable Barlaam a senior for the brethren. He became the first Kiev-Pechersk Farther Superior.

He himself went to the neighbouring hill, where he dug a new cell for himself. Nowadays it is the Near Caves. But the monks surrounded Venerable Anthony here soon. In such a way two complexes of the Caves of the underground monastery are appeared: the Near Caves (or Anthonian) and the Far Caves (or Theodosian).