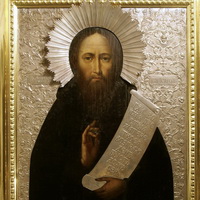 Venerable Theodosius became the founder of the coenobitic monastery. He was Venerable Antony Pechersky’s associate. He came to him being young and being professed in his cave.

Venerable Theodosius excelled all in humility and labours, that gave him everybody’s love. With his blessing the monastic statute was introduced into the Pechersk dwelling place. This statute was imported from Constantinople and later was adopted in all dwellings at the Rus’.

Hence there were 2 types of monastiс life, according to 2 examples presented by Venerable Anthony and Theodosius. The first of them is reclusion in the Caves and seclusion – an ascetic labor, which especially difficult and high. The second one – monastic coenobite community, which cultivated in the brethren such virtues as: patience, humility, obedience, brotherly love, elimination of personal will and full subordination to Farther Superior, elderly brethren and the rules of monastic statute.

While Venerable Theodosius was the Father Superior (1060-1062) a new wooden monastery was built above the Far Caves, where the brethren resettled. The brethren was one hundred in number. And it was quite a lot even for Greek monasteries. It was necessary to create a monastic charter, set of rules, regulating monastery life. That is why Venerable Theodosius sent one of the monks to Constantinople to eunuch Efrem, to rewrite the Studite rule and bring it to Kiev. At the same time metropolitan Georgy with one of the monks of the monastery of Stoudios, Michael, who accompanied him and gave him the monastic statute. On the basis of these two variants the monastic charter of the Pechersk monastery. It is necessary to admit that there was no ground monastery above the Near Caves as opposed to the Far Caves in the Old Russian period.

When the building of the Dormition Cathedral was finished in the maddle of the 70s of the Xith century, the center of the Pechersk monastery is moved to the territory of the present Upper Lavra. Not many monks stayed in the ‘old’ monastery. The Far Caves and the Near Caves became the place for seclusion for ascetics and burial place for the dead brethren. The first burial in the Near Caves was the burial of Venerable Anthony in 1073. The first burial in the Far Caves was the burial of Venerable Theodosius in 1074.