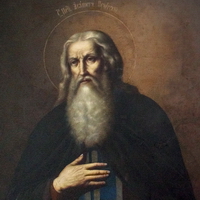 When abba Anthony of the Caves had become renowned as a healer of body and soul, the blessed Agapitos came to him seeking for spiritual healing through the sacrament of tonsure. St Anthony received him and tonsured him into the monastic life.

St Agapitos observed how St Anthony served the ill healing them by his prayers and giving them some herbs; he began to imitate the holy elder. Whenever anyone of the brethren fell ill, the healer left his own cell and ministered to the sick brother’s every need unceasingly beseeching God for the salvation of the ill. If the illness continued for a long time and the sufferer became despondent, St Agapitos strengthened him with prayer arousing faith in him. Thus, following humbly and obediently the patristic feats of St Anthony, Agapitos obtained the similar gift from God. He began to heal the sick with his own prayers and with herbs from his own table. That is why he came to be called a physician, or a healer.

St. Agapitos’ fame spread fast. Many ill people came to the monk’s cell and received their healing. At that time, there was a physician in Kiev, an Armenian by birth and religion. He was very good at medicine. He could tell at a glance how much a terminally ill person might expect to live. In case of hopelessness, the Armenian doctor would not even try to treat the ill. Once, a boyar in the service of Prince Vsevolod, was brought to the caves. The Armenian had cast him into despair by foretelling his inevitable death in eight days. The blessed Agapitos healed the ill by saying a prayer over him and giving him some herb potion. From that time the reputation of the blessed physician spread throughout the lands of Rus’.

The Armenian, however, led by his own jealousy, began to reproach the saint and seek ways to do him evil. Once, he sent a terminally ill man to the monastery. To be certain that the man would die, the Armenian gave him some poison herbs to take before he saw Agapitos. When the saint saw the dying man, he gave him his own herbs, prayed over him, and saved him from death. Since then, the malice against the saint grew even more in the Armenian physician. He convinced some of his accomplices to poison St Agapitos with toxic herbs. However, the saint consumed the deadly liquid and remained unharmed.

Soon after that, the Great Prince Vladimir Monomakh fell seriously ill in Chernigov. He was diligently but unsuccessfully treated by the Armenian physician. As he neared his death, the prince sent to Abbot John of the Caves asking him to send the blessed physician Agapitos to Chernigov. The abbot summoned St Agapitos and passed the prince’s request to him. The saint, who never left the monastery, replied with humility,

‘If I go out to treat the prince, I shall also have to treat other ill people outside the monastery. Therefore, I beg you, father, allow me to refuse to go out of the monastery walls and avoid human fame; I promised God to avoid it to my last breath. I would rather go abroad and return here again only after this temptation has passed.’

The prince’s messenger begged St Agapitos for at least some herbs and his prayers for the Great Prince. St Agapitos consented to that at the abbot’s insistence. The messenger brought the potion to the prince who became healthy immediately after consuming it. As soon as he was well enough, Prince Vladimir Monomakh came personally to the Cave Monastery in order to thank and honour the one through whom he had received his health. St Agapitos, however, did not wish the earthly fame and he hid himself. The prince gave the gifts he had brought to the abbot and departed. Some time later, Prince Vladimir sent many gifts for the blessed Agapitos with one of his boyars. When the boyar placed the gifts before the saint, the blessed responded, ‘Oh, child! I never take anything from anyone for healing; for I do not heal with my power but with that of Christ.’

The boyar answered, ‘Father, the prince knows that you accept nothing, but I beg you to accept these and give them away to the poor as you please, in order to comfort your son who was granted health by the Lord thanks to you.’

The saint replied, ’In this case I will gladly accept the gifts. Moreover, tell the one who has sent you that he should always give a part of his wealth to the poor; for the Lord Himself ,Who dwells amongst the poor, saved him from death. I could have done nothing by myself. Now I fervently beg the prince not to disobey me in this matter, so that he might not suffer more.’

As soon as the boyar left the saint’s cell, Agapitos took the gold at once, threw it out the gate of the monastery, and then ran away and hid. As the boyar left the monastery, he saw the gifts lying in front of the gates, and he took them to Abbot John. Then he returned to the prince and told him everything that he had seen or heard of the blessed elder, the way everyone honoured him as a true servant of God who sought for his reward in heaven rather than on earth. The prince did not dare to disobey St Agapitos; so he began to distribute much of his wealth generously to the poor.

After many God-pleasing toils and feats, the blessed elder Agapitos, the unmercenary physician, became ill himself. When the Armenian physician heard of that, he came to him as if for a visit and began to argue with him about medical matters asking, ‘What herb can this illness be treated with?’

The saint replied, ‘With the one indicated by the Lord — the Doctor for souls and bodies.’

The Armenian, considering the saint ignorant of medical matters, turned to his companions and said, ‘He understands nothing of this art.’ Taking St Agapitos by hand, he said, ‘I tell you that you will not live beyond the third day. If I am wrong, I will change my life and become a monk like you.’

The blessed one sternly responded, ‘Is that all your art? You speak of death and not of your skills. If you are a talented doctor, heal me; if you cannot, then why do you reproach me foretelling my death in three days? In fact, the Lord has already informed me that I shall not depart to Him for three more months.’

The Armenian said, ‘Your health has failed completely and you have become weak; a person in your condition cannot live longer than three days.’

Meanwhile, a critically ill man suffering from the same sickness as St Agapitos, was brought to the blessed elder for healing. With God’s help, the saint immediately rose up and went to minister to the dying man as if he himself were not ill at all. Taking his usual green herbs, ordinary table greens, he showed them to the Armenian saying, ‘Here are the herbs of my doctoring; watch and remember.’

The American looked at them and said, ‘These are not local herbs they must be from Alexandria.’

The saint chuckled at his ignorance, gave the sick man the greens and healed him with a peaceful prayer. Then, turning to the Armenian, he said, ‘Child, you are welcome to join me in eating this food.’ The opponent responded, ‘Father, we fast four days this month and we are now in this fast.’

The saint asked, ‘What is your faith?’

‘Don’t you know? I am Armenian?’ he replied.

The saint resented, ‘How did you dare to enter here, defile my cell, and hold my sinful hand! Go away from me, you impious heterodox!’

The disgraced Armenian left. St Agapitos lived on for three more months, as he had foretold, and then departed to the Lord on the first day of the month of June. The brethren placed his honourable relics in St Anthony’s cave.

Some time after the saint’s repose, the Armenian physician came back to the Cave Monastery and told the abbot, ‘Now, I wish to renounce the Armenian heresy, truly believe in the Lord Jesus Christ, and work for him in the monastic life. Agapitos appeared to me and reminded me of my promise to accept the monastic tonsure. Otherwise, I would destroy my soul. I believe that Agapitos is truly saint. For, when he desired to live three months more, the Lord gave him that time; and if he had wanted to live three years longer, the Lord would have granted him that period. He himself wanted to go away from us; as a saint, he desired the kingdom of the saints. So, the Lord took him from this temporary life and gave him eternal life in the heavenly dwellings. Therefore, I wish to fulfil the command of this holy man.’

The abbot tonsured the Armenian and inspired him as a physician for the other people’s bodies to be skilful in doctoring of his own soul like blessed Agapitos was. Having lived a God pleasing life for many years, the monk was granted a blessed repose giving honour and glory to the Great Physician of our souls, Lord Jesus Christ, to Who be glory with the Father and the Holy Spirit, unto the ages of ages. Amen!