Rev. Nikon the Abbot of the Caves 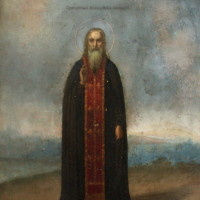 When the Lord blessed the establishment of the angelic way of monasticism, He brought the holy Nikon to the experienced and hardworking teacher — Anthony. The disciple and co-struggler became worthy of his abba. Zealously ascending the steps of monastic virtues, imitating his teacher in everything, St Nikon proved to be a worthy leader and a reliable guide in the spiritual vineyard of monastic virtues. St Anthony preached for those wishing to start their angelic life and, once ready, he sent them to Nikon for the tonsure. There was a certain resemblance to Moses and Aaron in the relationship between those two holy ascetics. Moses brought the Law from Mount Sinai and Aaron acted on his instructions. Anthony brought the monastic Law from Mount Athos and Nikon acted on his command. St Nikon fulfilled his duties with complete obedience accepting both joys and sorrows with thanksgiving to God.

Nikon felt a great spiritual joy of tonsuring Theodosius who shortly became a great teacher of monks in the lands of Rus’. He was also happy to tonsure the blessed Barlaam (the boyar son) and Ephraim (the prince’s servant). However, the joy brought much grief for the saint. Prince Izyaslav was enraged that St Nikon had dared to tonsure one of his noblemen and his most useful servant without his permission. The prince ordered to arrest Nikon and bring him to the palace. The servants fulfilled the command and brought St Nikon to the prince. The last looked upon him with wrath and asked, ‘Was it you, monk, who dared to tonsure my nobleman and my servant without my permission?’

St Nikon replied meekly, ‘I tonsured them by the grace of God as directed by the Heavenly King, Jesus Christ, Who called them to such a feat.’

The prince’s anger grew with meek but powerful reply of the monk. He demanded, ‘Either entreat them to return to their homes or I imprison you and those with you, and have your cave dug up!’

St Nikon replied calmly again, ‘Do whatever you please, my lord. But I will not distract spiritual soldiers from the Heavenly King.’

When the monks of the Caves heard of the prince’s intention to destroy their monastery they prepared to leave their caves. In the meanwhile, the princess heard of her husband’s intention and interceded for the monks. She related how her own father, the Polish Prince Boleslaw, had suffered God’s chastisement for a similar deed. Hearing of this, Prince Izyaslav reconsidered his plans and, fearing a similar chastisement by God, repented and sent a plea to the monks who had fled by that time. He asked them to return to the caves.

St Nikon continued his austere life in prayer and fasting. Thus, he gained many victories over the devil. However, with the growth of the brethren the saint longed for departure into seclusion and life in silence. St Nikon asked St Anthony for a blessing and the great abba sorrowfully granted his permission for his son’s departure. St Nikon set out for the Black Sea together with a Bulgarian monk who had arrived from Mount Athos. When the two monks arrived at the sea they parted company. The Bulgarian set out for Constantinople but he found an island and decided to settle there. The monk struggled there for many years and reposed in peace. Up to these days the place is called ‘The Bulgar’s Island’.

St Nikon went to the island of Tmutarakan and built a cell for himself not far from the town. The saint grew in the grace of God through his great feasts. At first, the islanders marvelled at St Nikon’s life as they had never heard of monastic life before. However, St Nikon’s example and obvious spiritual gifts led many to seek for imitating him. Soon, men from the whole region were coming to his place and begging for a tonsure. The holy elder began to instruct them and the monastery grew up. A church was built in the name of the Most Holy Theotokos and the place increased both in size and in grace.

When Prince Rostislav of Tmutarakan reposed, the islanders asked St Nikon to go to Chernigov and petition Prince Svyatoslav to send his son Gleb as their prince. St Nikon was successful in his mission and went to Kiev in order to visit the Cave Monastery.

When St Nikon arrived in Kiev, he met St Theodosius. Both monks fell to the ground in tears greeting each other as if they saw angels. St Theodosius could not bear to be separated from the blessed Nikon again. He implored the elder to return to Kiev and remain there for the rest of his life. St Nikon promised to return to the Caves, as soon as he could prepare his own monastery for his departure. Keeping his word Nikon returned soon and placed himself in complete obedience to St Theodosius with great humility.

When a period of strife erupted among the princes of Rus’, Nikon returned to more peaceful atmosphere of Tmutarakan again. During his absence, St Theodosius reposed and Stephen became the abbot. When peace had been restored in Kiev, St Nikon returned to the Cave Monastery to spend the rest of his days there. Stephen also reposed in Lord and St Nikon, who was greatly revered by the brethren, was elected the abbot.

During the abbacy of St Nikon, two icon painters from Constantinople unexpectedly arrived at the monastery. They explained that the two monks had visited them in their native town and instructed them to go to Kiev to paint icons there. On their journey, they had encountered many difficulties and thought of returning home. However, they saw an icon of the Most Holy Theotokos in a dream and heard her voice ordering them to continue the journey. When the two icon painters saw portraits of Sts Anthony and Theodosius upon their arrival to Kiev, they glorified God having recognized at once the two monks who had directed them to the Kiev Cave Monastery. The two icon painters adorned the entire monastery with the holy icons.

Righteous Nikon reposed in the Lord in 1088. His holy relics rest uncorrupted in the caves.

By his holy prayers may we all be saved! Amen!