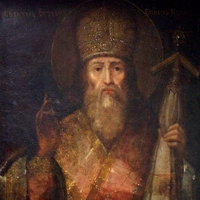 Memorial day on February the 10th

A contemporary of St. Barlaam, Ephraim, was also of a boyar origin. He was in a close relation to Prince Izyaslav and had much influence at court as a favourite of the Great Prince. Like St. Barlaam, Ephraim came to love St. Anthony dearly and he wished to enter the Cave Monastery. After Ephraim’s fervent and persistent entreaties, St. Anthony ordered abbot Nikon to tonsure him into monasticism. St. Anthony had to endure many sorrows and sufferings because of the tonsures of the boyars Barlaam and Ephraim.

The story was spoken of in detail in the hagiographies of Sts.  Anthony and Nikon.

The prince of darkness and the hater of the holy ascetics, the devil, sought to destroy the Cave Monastery and its righteous monks by inflaming the heart of Prince Izyaslav against them. All the snares of satan, however, were in vain. Although the anger of the Great Prince caused many sorrows and sufferings and the holy ascetics had to leave their caves for a time, by God’s mercy, they soon returned home and the Cave Monastery rose to fame and blossom.

St. Ephraim realised that his tonsure had caused the demons’ wiles at the brethren of the holy monastery. Thus, he gave himself up entirely to the ascetic life, including fasting, prayer and vigil, to attain a decisive victory over satan. He submitted himself completely to his instructor and guide, St. Anthony, and desired to imitate him in everything. Thus, St. Ephraim desired to visit the holy places and obtain more love and zeal for imitation of the reverend fathers’ feasts  aimed at salvation.

The saint appealed to St. Anthony for a blessing to visit Greece and the Near East. Having received the blessing, he visited Constantinople and Palestine, and went to the holy places of desert ascetics, getting acquainted with their lives. On his way back, the saint stopped in Constantinople and copied the Rules of the monastic life at the holy Studious Monastery. St. Theodosius used the Rules as the basis for the lives of brethren at the Kiev Cave Monastery. St. Ephraim did not stay long at the monastery after he had returned from the holy places. At that time, the Bishop Peter of Pereyaslav reposed and, by God’s will, at the desire of the Great Prince Vsevolod Yaroslavovich, Metropolitan John of Kiev consecrated St. Ephraim to the vacant cathedra.

St. Ephraim’s God-pleasing life of virtue and struggle had become widely known by that time. At his new prelate position, St. Ephraim began to construct God’s churches in his diocese with great zeal; and God helped him in his good work. By the labour and concerns of St. Ephraim, a beautiful large church named after Archangel Michael was built. The church became a cathedral of Pereyaslav diocese. Moreover, he built stone churches of St. Theodore, of the Holy Apostle Andrew, and many others. All these beautiful buildings, however, suffered from Tartar invasion. The saint participated in carrying over the holy uncorrupted relics of St. Theodosius from the caves.

St. Ephraim ended his own virtuous life with a peaceful, blessed demise; he was buried in his newly built cathedral church. The Lord glorified St. Ephraim with incorruptibility of his relics and gave him the gift of intercession before the throne of God for everyone who appeals to him with prayer and those trying to imitate the life of the blessed.