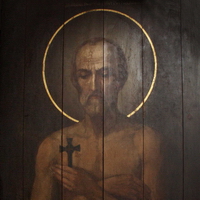 The Memory day on JULY the 31st

Our Venerable Father St John the Much-Suffering, the beloved disciple of the Cave Monastery, was a blessed virgin, betrothed to the heavenly bridegroom and he freely endured much sorrow for the sake of virginity. Not long before his death, the saint himself revealed the details of his great struggle. St John decided to reveal his life story not because of pride for he had truly obtained the gift of the holy humility. He shared his much- suffering toils rather for the support and edification for us, the poor sinners.
John struggled as a recluse in the cave of St Anthony. One of the brethren, suffering from diabolical distractions of earn desires, came to beg for the saint’s prayers for his deliverance. The saint replied, ‘Brother, take courage and may your heart strengthened; endure and keep yourself on the Lord’s path, He will not leave you in the hands of the enemies nor will He allow them to seize you in their teeth.’

However, the monk answered, ‘Oh Father! Believe me if you do not help me I will have no rest going from one place to another.’

The saint said gently, ‘Why do you want to give yourself up as food to the enemy and become like a man standing on the edge of a chasm? The enemy will cast you over the edge and you may not be able to get up after the terrible fall. If you remain here, at the holy monastery, you will be like a man standing far from the chasm, and the enemy will not be strong enough to throw you down. The Lord will lead you out of the pit of passions and the mud of impurity for your patience.’

Then St John told that brother about his own life.

‘When I came to the Holy Cave Monastery and began to struggle, I suffered much, overcome by lust for fornication; and I do not know what I did not endure for the sake of my salvation. I often ate nothing for two or three days or, sometimes, for a whole week. I did not quench my thirst but kept vigil for the entire night. I continued restless for three long years. Then, I went into a cave, where our holy father Anthony reposes, and spent a night and a day in prayer near the grave. At length, I heard the saint’s voice ‘John, John! You must shut yourself up in the cave so that you can occupy yourself with warfare through isolation and silence, and the Lord will help you by prayers of His saints.’ After that, I entered into reclusion in this narrow and sorrowful place and remained here for thirty years. Only recently, I did acquire peace.

Knowing the strength of His chosen vessel, God allowed Satan to tempt the saint with powerful passions. St John continued,

I struggled with carnal passions and thoughts subduing my body by fasting and vigilance all the time. When everything proved insufficient, I did the following: with the approach of the Great Fast, I dug a deep hole and entering it, I covered myself with sand up to the chest leaving my arms and head free. I spent the entire fast this way weighed down by the soil, not moving a single joint. Satan did much harm wishing to drive me from the pit. He struck me with a terrible affliction in my legs so that they shrivelled, and my members were burning as if on fire. However, without thinking or grieving about this suffering, I rejoiced in my soul guarding its purity from defilement. I would rather have burned from that fiery affliction, than be conquered by the devil and leave the pit. At the same time, I saw an apparition of a terrible and fierce serpent breathing fire and seeking to devour me. The apparition continued for several days. On the radiant night of Christ’s resurrection, the terrible serpent suddenly attacked me and, taking my head and arms into its jaws, it seared the hair on my head and beard, as you can see now.

Still in the jaws of the serpent, I cried out from the depths of my heart, ‘Oh God, my Saviour! Why hast Thou left me? Show me Thy mercy, Oh Master; for Thou art the only Friend of man… deliver me from the jaws of this enemy which is roaring like a lion to swallow me: arise, Oh Lord, and save me, send forth Thy light that the serpent may vanish before Thy countenance.’

As I finished my prayer, there was a sudden flash of the divine light like lightning, and the serpent vanished. Thanks to God’s grace, I have never seen it again. Then, I heard God’s voice calling to me, ‘John! Help was given you; see that you are attentive to yourself, so that worse does not befall you in the future life.’

I bowed and said, ‘Oh Lord, why didst Thou leave me to be tormented by evil?’

The Lord replied to me saying, ‘I proved you according to the strength of your patience, so that by the fire of temptation you would be as pure as gold. For, I do not allow any man to be tempted beyond his strength… but as a wise master, I give the greater and heavier work to the healthiest and strongest servants, and light work to the weak. In order to be delivered from the warfare of dissolute passions, pray to St Moses the Hungarian, for he accomplished more than Joseph and can help those who suffered from this passion.’

I cried out, ‘Oh Lord! Have mercy on me by the prayers of this saint.’ An ineffable light came upon me, which is still with me; and all those who come to me with faith in Christ, experience such a light, as this one, which illumined me at night of the Lord’s resurrection, for the sake of the future eternal light.

In such a way, St John completed his much distressed life. He turned to the brother possessed by passions saying, ‘Brother, we ourselves nail our minds to sensuality. For this reason, the Lord allows passions to fall upon us; for we never do works worthy of repentance. But I tell you, brother, pray to St Moses and he will help you.’

Then, having prayed together with the brother, St John blessed him with a bone of relics of St Moses and gave it to him saying, ‘Place this against your body.’

The brother obeyed and immediately felt that the burning died out and all carnal desires in the body were mortified. Then the two sent up glory to God and His St Moses together.

St John the Much-Suffering reposed in peace on July 18 (old style). His holy relics have poured forth an abundance of healings and miracles to this day.

By prayers of this longsuffering virgin, our father John, may we be counselled unto worthiness of the heavenly kingdom, in praise of the One God, glorified in Trinity, to Who be honour and worship unto the ages of ages. Amen!