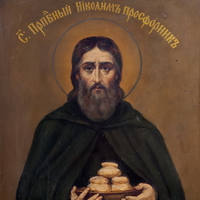 Memorial day on November the 13th

Every soul which is filled with God’s grace is simple, pure and sincere, alien to evilness and flattery. This is why the Holy Apostle says, God has chosen the foolish of the world to confound the wise; and God has chosen the weak of the world to confound the strong (1 Cor. 1, 27). Our holy father Spyridon belongs to the number of such chosen ones of God.

The blessed Spyridon originated from a family of simple villagers, illiterate and ignorant. He was, however, very strong in spiritual intelligence and rich in virtuous and God-pleasing struggles. As his heart was filled with the awe of God, which is the beginning and the source of true wisdom, St Spyridon came to the Cave Monastery and began his severe ascetic life in the year 1139.

At the monastery, in his adulthood, St. Spyridon began to learn literacy and read books soon. He learned the entire Psalter by heart and chanted all the Psalms every day.

The great faster, Pimen, who was the abbot then, noticed St. Spyridon’s piety, meekness and love of toil. He gave him a God-pleasing obedience — baking prosphoras. 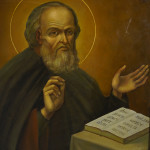 The Blessed Spyridon zealously fulfilled every task in the bakery and continued his great spiritual struggles. The work of his hands was preparing the pure offerings brought before God by the priests; the fruit of his spiritual labours was the sacrifice of constant praise to God. When chopping wood or kneading dough, he always chanted the Psalms of David and sang through the entire Psalter daily.

Once, while performing his usual duties, St. Spyridon started a fire in the oven while preparing to bake prosphoras; suddenly, the flames shot out of the oven and the ceiling of the room began to burn. The blessed man quickly covered the oven opening with his mantle and ran to the well. He tied up the sleeves of his hair shirt, filled it with water, and ran back toward the bakery calling the brethren for help on his way. The monks who ran to the bakery saw a wondrous thing. The mantle, placed over the blazing oven opening, remained intact and unharmed by the fire, and the water did not pour through the hair shirt but remained in it until it was poured on the fire. When the brothers saw the miracle, they loudly glorified God Who had obviously helped His saint. 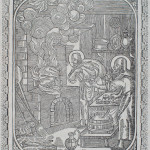 Monk Nikodemos was the blessed Spyridon’s closest helper in the bakery. He strove with ardour to imitate the saint in toil, morality, and prayerful struggles.

For thirty years, the two meekly and humbly fulfilled the obedience of baking prosphoras. At quite an old age, they reposed in the Lord. By their holy prayers, may we be found worthy of the bread of life, grace and the glory of Jesus Christ, to Who with the Father and the Holy Spirit be honour, glory and worship, now and ever and unto the ages of ages. Amen!