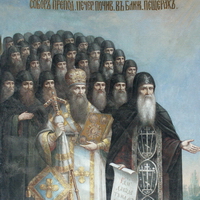 The blessed Matthew of the Caves followed the first Holy Evangelist both in name and in deeds. This saint gave himself over to ascetic toils at the Cave Monastery and received a mysterious gift from God — that of seeing the enemies of mankind — the demons — and discovering their hidden wiles. Revealing them to others, he served for the good and salvation of the brethren.

Once, standing in his usual place during the church service, the blessed Matthew saw an invisible demon in the image of a warrior. The demon was moving about the church and throwing some sticky flowers on the brothers. If a flower fell on a brother and stuck to him, his attention to the divine service immediately weakened and his fervour for prayer was lost. The brother would find some excuse for himself, leave the church for his cell soon, where he went to sleep and did not return to the church. When the blessed Matthew shared his visions with the brethren, they became especially watchful and attentive in church and worked hard to resist the temptation of leaving church before the end of the service.

St. Matthew was in the habit of leaving church last after the end of a divine service. Once, he left after the the morning service, sat down by the belfry to rest, and fell asleep. In his dream, he saw a large crowd coming into the monastery yard from the gates. In the midst of the crowd the saint saw a demon riding a pig proudly. The elder asked them, ‘Where are you going?’

The demon replied, ‘After Michael Tobolkovich.’

The elder crossed himself and went to his cell. It was dawning already and the saint said to his pupil, ‘Go and find out if Michael is in his cell.’

The pupil returned with the reply, ‘Today, after the morning service, he went out beyond the monastery wall.’

The elder revealed his vision to the abbot and the brethren. The abbot called Michael in and asked about his behaviour. Hearing of his sinful conduct, the elder lovingly admonished him and instructed with edifying words. The blessed Matthew taught the brethren to return to their cells after services and remain in prayer and contemplation of God.

During St. Matthew’s lifetime, the holy father Theodosius reposed in peace. Stephen was elected the abbot and after him — St. Nikon. During St. Nikon’s tenure, St. Matthew had the following vision: during the morning service, St Matthew looked toward the abbot, but, instead of St. Nikon, he saw a donkey. When the blessed elder told abbot Nikon of this vision, the abbot understood it. St. Nikon had fallen into tardiness about attending church services — sometimes through laziness. The abbot repented and achieved the blessed holiness soon after that.

The holy elder saw many more visions and revealed them to the brethren. Thus, he served for the benefit and instruction of all. St Matthew lived to quite an old age and peacefully reposed in the Lord. His uncorrupted relics lie in the Caves together with the relics of the other holy ascetics and he now prays to the Lord for the deliverance of sinful and weak people from the snares of demons.

Glory to the Lord to Who all honour and glory is due, always, now and ever and unto the ages of ages. Amen!