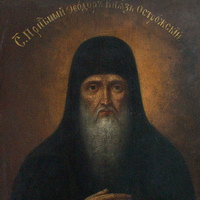 Memorial day on August the 24th

St. Theodore Danilovich, Prince of Ostrog, was one of the descendants of Daniel of Galich. During the first half of the 15th century, he was distinguished by his zealousness in defending Orthodoxy. At that time, the Principality of Lithuania was in a desperate struggle with Poland. Vytautas (or Vitovt), the cousin of King Vladislav Yagello and overlord of Lithuania, feared that the Metropolitans of Rus’ could establish a brotherly unanimity between Lithuania and Moscow. This would have been dangerous for the Lithuanian overlords; so Vitovt strove to establish a separate Metropolia for his lands. It was beneficial for the Orthodox Faith in Lithuania that this country was not subjected to Poland. Therefore, Prince Theodore came to the aid of Lithuania. He also hired Vlachian and Tartar soldiers. Prince Theodore fought bravely and won many victories.

After the war, Prince Theodore handed over his fame and throne to his son Basil and received monasticism at the Cave Monastery.