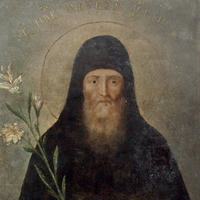 The impure enemy of mankind struggles mightily against people who are susceptible to the passion of fornication so that they might remain darkened by this passion and are unable to look up to God. For, only the pure in heart… will see God (Mt. 5, 8). It was upon that very field of battle that our reverend father Moses fought and defeated the power of the impure enemy, setting an example of such a victory for us.

St Moses was a Hungarian by birth. Together with his brother George, he was in the service of a pious prince, Boris the Passion-bearer, who loved Moses dearly. During the battle on the Alta River, in the war between Prince Boris and Prince Svyatopolk, St Moses was the sole survivor of Boris’s army. The blessed Moses fled to Kiev where he hid from Svyatopolk in the home of Predislava, Prince Yaroslav’s sister. Moses spent his time in prayer there. Finally, Prince Yaroslav defeated Svyatopolk who then fled to Poland. Later, Svyatopolk returned with Boleslav of Poland and his army. They drove Prince Yaroslav away and occupied Kiev. King Boleslav returned to Poland taking two of Yaroslav’s sisters, several boyars and St Moses as captives. The blessed man, who was healthy, muscular, and exceedingly handsome, was led away chained by hand and foot.

A wealthy and young Polish noblewoman saw the saint and was seized by the lust of carnal desires toward him. She went to Moses and asked him how he had fallen into such a cruel condition. He replied, ‘It is pleasing to God.’

The woman then continued, ‘If you yield to me I will deliver you and make you great in all Poland, and you will rule over my estates.’ 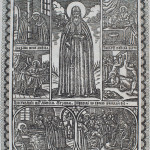 The saint, however, understood her unclean lust and replied, ‘What man who has obeyed a woman acted well? Adam obeyed a woman and was banished from paradise. Samson, who overpowered everyone with his strength, was given into the hands of aliens due to the unclean enchantment of a woman. Herod, who had won many victories, yielded to impure passions, was enslaved by a woman, and beheaded John the Forerunner. How can I follow the unclean advice of a woman who I even do not know?’

But she continued, ‘I will save you from death and make you renowned. I will have you as my husband, for I cannot bear to see your youth go to waste.’

St Moses replied sharply, ‘I know that I will not fulfil your desires. I want neither power nor wealth, but I seek for spiritual and physical purity. May I not ruin my five-year long toils, and now I innocently endure torments so that I may be saved from eternal torments.’

The woman then conceived a new evil scheme. ‘If I ransom him,’ she thought, ‘then I can force him to submit to me.’

She sent her servants to the master of the captives and bought Moses for three thousand gold pieces. Now, that St Moses was her slave, she ordered that he be clad in rich attire and fed a nice food. She tried even more to entice him to fornication. The blessed man, however, ignored the woman’s frenzy, prayed and fasted more diligently, taking dry bread and water only. The woman being thus ashamed, fell into a rage and ordered to throw the saint into a dungeon intending to starve him to death. But the Lord, Who ever gives food to all flesh, Who once nourished Elias in the wilderness and fed Paul of the Thebaid did not forsake Moses. One of the woman’s servants secretly brought Moses food. Other servants tried to convince the saint, saying, ‘Moses, our brother, what prevents you from marrying the widow? You are young and the woman lived with her husband for a year only. She is beautiful, her wealth is countless, and her power is great. Even a prince would not disdain her, while you, a prisoner, do not want to be her lord. If you are afraid of violating Christ’s commandment, He Himself said, Therefore a man will leave his father and mother and cleave to his wife and the two shall he one flesh (Mt. 19, 5). Moreover, the Apostle said, it is better to marry than to burn, and that young widows will remarry. You are not bound by monastic vows, you are free. So, why do you cause yourself to suffer such torments? How will it benefit you if you die? Even the righteous ones: Abraham, Isaak and Jacob had wives. It is better for you to submit to a woman and be free and be the lord of this house.’

The blessed Moses replied to them, ‘Oh brethren and good friends! You advise me well, but I know it is worse than the advice the serpent gave Eve in paradise. You advise me to submit to a woman, but I shall not accept your advice and, even if I die in these chains and torments, I shall not yield to her flattery. If many of the righteous were saved with wives, I am the only sinner then, and I will not be saved with her. I Want neither kingdom nor power in the Polish land but I seek f0r the higher, heavenly kingdom. Even if I am deprived of life, I will not accept the advice of this woman and I will remain like a monk, for Christ said in His Gospel, and everyone who has left houses or brothers or sisters or father or mother or a wife or children or fields for my sake will receive a hundred times as much and will inherit eternal life (Mt. 19, 29). Shall I heed Christ or you? The Apostle says the same, An unmarried man is concerned about the Lord’s affairs — how he can please the Lord. But a married man is concerned about the affairs of this world — how he can please his wife (1 Cor. 7, 32-33). I ask you who should a man work for — the Lord or a wife? Therefore, this woman’s beauty will never seduce me and will not separate me from Christ’s love.’

When the woman heard of that, new evil thoughts arouse in her mind. She had St Moses dressed and mounted a horse. Surrounded by a large retinue, she rode with him among her villages and towns saying to him, ‘This is all yours; do what you wish.’

She said to people, ‘This is your lord, and my husband.’ Everyone bowed to Moses.

The saint felt pity toward the woman’s madness and said to her, ‘Everything you do is in vain. You cannot entice me with the corruptible things of this world and you cannot steal incorruptible spiritual wealth from me. Please try to understand me and do not go through all this in vain.’

The woman said in rage, ‘Do you not know that you have been sold to me? Who will disenthrall you from my hands? I will not let you go alive! I will have you tortured and executed!’ The blessed man answered her with boldness, ‘I fear no evil, for the Lord is with me. I intend to work for Him in the monastic life.’

At that time, by God’s mercy, a priest monk from the Holy Mountain who had been travelling in the area, heard of Moses and visited him secretly. He tonsured him and taught him much about spiritual and physical purity. When the woman heard of that, she lost all hope to seduce Moses and ordered to have him tortured. He was stretched out and beaten with metal rods until the ground was soaked with his blood. The torturers pleaded Moses to obey the woman. ‘There is no limit to the tortures she will inflict on you, before having you killed.’

St Moses replied to all this bravely, ‘Brothers! Do what you are ordered to do. It is impossible for me to renounce monasticism and God’s love. No torment, nor fire, nor swords, nor wounds can separate me from God and the holy angelic tonsure. I will not submit to the accursed will of this shameless woman, who has brazenly displayed her shamelessness before all people, inciting me to defilement and fornication.’

The woman wrote to King Boleslav in despair accusing St Moses and asking the king to influence him.

The king ordered the woman to come and bring along her slave. When he saw Moses, he tried to compel the saint to accept the woman. Finally, he said to Moses, ‘You are so insensitive that you refuse so many benefits and honours and give yourself over to torture? You must choose either life or death. If you fulfil the will of your mistress, you will receive great honour and power; if you disobey you will receive death.’

Then the king said to the woman, ‘This captive, who you have purchased, cannot go free. As his mistress, do whatever you will with your slave, so that other slaves do not dare to disobey their masters.’

Our holy father Moses replied to the king, ‘What use is it to a man to acquire the whole world and lose his soul, or what will a man give in return for his soul? You promise me glory and honour, but you yourself will die soon, and this woman will be killed.’ 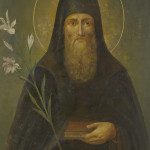 The saint’s prophecy came true. The woman began to torture Moses even more ordering to beat him a hundred blows a day, so that he would eventually die from bleeding. Meanwhile, King Boleslav raised a severe persecution against monks and drove them out of Poland. In the midst of all this, Boleslav fell ill and died suddenly at night. At his death, a great rebellion broke out in the land; people rose up and slew their bishops and nobles, including the shameless woman. The slaves were freed.

St Moses, the good warrior of Christ, had suffered for six years. He had struggled in his chains showing the patience of Job for five years, but he suffered courageously for purity more than Joseph during the sixth year. After his liberation, he made his way to the Kiev Caves, where he struggled as a hesychast for ten more years. Here, he radiated the grace of God and attained great spiritual heights. He reposed on July 26, while St Anthony was still alive. His sacred relics repose uncorrupted in the cave of St Anthony. Many have been delivered from fornication and impure passions thanks to his holy prayers.