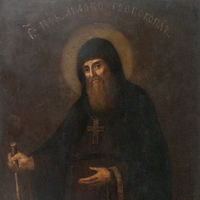 Memorial day on January the 11th

In ancient vision the holy Prophet Ezekiel saw first and then the Christ’s confidant John saw it as well – there was a lion-like animal between other angelic faces (Ezek. 1, 10; Rev. 4, 7). This mysterious symbol is typical for the holy Evangelist Mark and our Mark of the Kiev Caves. As a lion vitalizes his dead brood with his roar, thus, God bestowed Reverend Father with such a powerful voice that the dead brothers woke up upon his word and obeyed him. Therefore, it is worthwhile mentioning him among the other angelic names.

The era of St Mark’s struggle is especially notable by the transfer of the honourable relics of St Theodosius from the cave to the holy church.

St Mark was completely non-acquisitive. If anyone gave him anything, he quickly distributed it to the poor.

He served the brethren digging both burial places for the reposed brothers and caves for prayers. The saint accompanied his toils with prayers and the strictest fasting. He allowed himself a small amount of water only. In such a way and with unceasing vigilance, he finally subdued his flesh and defeated the enemy. He resembled the bodiless angels on earth; he did not fear death, it rather feared his voice, for St Mark received such a gift of wonderworking from God that even the bodies of the reposed obeyed his voice. 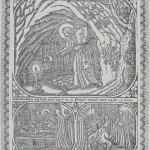 It once happened that Mark began to dig out a burial cave but he became too exhausted by hard work and was unable to finish the task. The burial place was too narrow. At that time, one of the brethren had reposed after a lengthy illness. There was no other place to bury him except for the narrow crypt; because of its narrowness, it was scarcely possible to place the coffin in it. The brethren began to reproach Mark saying that due to the narrowness of the crypt they could neither bury the brother properly, nor pour oil upon him. The saint said to the reposed monk in complete simplicity, ‘Here, brother, take the oil and pour it upon yourself.’ The deceased stretched out his hand, took the oil, poured it upon himself in the form of the Cross, and returned the vessel. At the sight of this miracle, everyone fell into terror and tremble.

Sometime later, a similar miracle occurred when one of the brothers reposed after a long illness. A friend of the deceased washed his body as usual, and went to the cave to look at the place where his friend’s body was supposed to be placed. He asked St Mark about the place and the blessed cave dweller replied, ‘Go and tell the brother to wait until morning, when I have place dug for him, and then let him depart to eternal peace of life.’

The brother replied, ‘Father! I have already washed his body. Who should I give your message to?’ St Mark responded, ‘You see this place here; it is not ready yet. I tell you, go and say to the reposed, ‘Sinful Mark tells you, brother, to remain here on earth for another day and in the morning you will go to Christ, as you desire.’ In the meanwhile I will prepare the place for him and will let you know. ’ 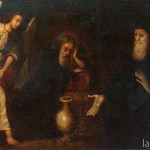 The brother obeyed. The brethren were chanting the usual funeral service over the reposed monk. Approaching the coffin, the friend said, ‘Brother! Mark asked you to wait until the cave is ready for you.’ As soon as he uttered that, suddenly, the deceased opened his eyes, his soul returned into the body and he remained alive for the rest of the day, with his eyes open. Although, he did not say a word to anyone. In the morning, the friend once again came to the cave to find out if the place was ready. The saint said, ‘Go and tell the brother that Mark tells him, ‘Leave this temporary life now and go over into the eternity, hand your spirit to God. Your body will be placed here, in the cave, with the holy fathers, for the place is ready now.’ The monk went there and did as he was ordered. The brother closed his eyes immediately, gave his soul into God’s hands, and was buried with honour. The brothers were all amazed by the most glorious miracle; they glorified God.

There were two brothers, John and Theophilus, at the Cave Monastery. They loved each other so much that they pleaded St Mark to prepare a double grave, so that they could be buried side by side. Many years later, the older of the two brothers was away on monastery business. His younger brother, John, having pleased God, fell ill and reposed. His body was placed in the cave. Soon after that, Theophilus returned to the monastery. He found out about his brother’s repose and began to grieve heavily. Together with some of the brethren, he went to the cave to view the body. Seeing that his brother was laid at the higher place in their common grave, he became indignant with St Mark and said, ‘Why did you put him in my place? I am older than he is.’ 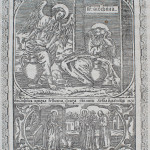 The cave dweller bowed humbly to Theophilus and said, ‘Forgive me, brother, I have sinned.’ Turning to the dead man, he said, ‘Move, brother, give this place to your older brother and you lie down in the other place.’ The dead man moved to the lower place in the grave. At that, St Theophilus fell down at the knees of St Mark begging his forgiveness, ‘I have sinned, father, in having my brother move from his place! I pray, order him to return to the higher place.’ The blessed one replied, ‘The Lord Himself did this in order to remove all enmity between us, so that you do not have malice against me. The body of your reposed brother showed his love for you even after his death by offering you the senior position. This is the matter of God alone; I am a sinful person and thus, I cannot by myself, without need, say to this reposed one, arise and move once more to the first place. You order him if he obeys you. I know, however, that you ought to remain here now and inherit your senior position. Since you are not ready for your departure yet, go and take care about the salvation of your soul. After a short while you will be brought here.’

Hearing that, St Theophilus became terrified and decided that he would soon die. He gave away everything that he possessed keeping his mantle only and every day he awaited for the hour of death. No one was able neither to stop his tears nor to tempt him with tasty food. Tears were his bread day and night (Ps. 41. 42, 3). God granted him several more years for repentance which he spent in fasting and lamentation. He even went blind from continuous weeping.

St Mark foresaw the hour of his death and told Theophilus, he would soon depart this life. Theophilus pleaded, ‘Father, either take me with you or restore my sight’. St Mark answered, ‘Do not desire death; it shall come in its own time, even if you do not wish it. Let this be the sign of your impending end: three days before you depart this world your eyesight will return.’

The holy Father Mark spoke this prophecy about Theophilus’ repose and then he himself departed to the Lord in heaven. His wonderworking relics were placed in the cave in a coffin prepared by his own hands.

The blessed Theophilus doubled his weeping and struggle. Finally, he regained his sight in accordance with the prophecy of the saint and he understood that his end was near. He began to pray even more diligently. On the third day after he had regained his sight, he died and his honourable relics were placed in the crypt next to his beloved brother, blessed John, near the relics of St Mark. He who had sowed tears on earth, reaped joy in heaven. Their memory is celebrated on September 28 and on the second Sunday of the Great Lent.