Memorial day on October the 27th

The present form of this world is passing away. The Lord hath cast down the thrones of proud princes, and set up the meek in their stead (1 Cor. 7, 31; Sir. 10, 14). The blessed and faithful prince, Nicholas Svyatosha, understood the fragility and temporal greatness of earthly power. He was the son of David Svyatoslavovich, Prince of Chernigov, and the grandson of Svyatoslav Yaroslavovich, the Great Prince of Kiev and Chernigov, who founded the holy church for the Kiev Cave Monastery.

Prince Nicholas had ascended to his throne, but he soon realized that permanent kingdom is only possible in heaven; it abides eternally and is filled with ineffable joys prepared by the Lord for those who love Him. For the sake of this eternal, heavenly kingdom, Prince Nicholas left the glory, wealth and honour of his earthly princedom. The saint came to the holy Cave Monastery and took the angelic image of monasticism. He matured in obedience, working for the brethren in the kitchen, chopping wood and carrying it from the riverbank to the monastery. The evangelical radiance of his life caused all those around him to glorify God.

When Prince Nicholas’ brothers, Princes Izyaslav and Vladimir, learned of the saint’s life, they tried to lead him out of the monastery. However, this true novice begged them with tears to be left alone to continue his soul-saving labours for another year. The brothers agreed, and Nicholas stayed at the monastery for the next three years. He served the brethren at the kitchen with diligence and reverence. After that, he was given the obedience of a gatekeeper. He spent three years at the gatehouse going nowhere, except to church. From there he was assigned to serve at the refectory.

After he had thus been perfected in obedience, the abbot instructed him in hesychia and sent him to his cell to practice the stricter hesychasm. As an anchorite, he planted a garden near his cell and was always occupied either with it or with other work. St. Nicholas always had a prayer in his heart, ‘the Lord Jesus Christ, Son of God, have mercy on me, the sinner.’ He only ate from the common table of the refectory. Whatever else he received both from his garden and from relatives, he gave to the poor and to pilgrims, or donated for building of the church. 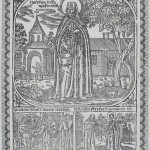 Whenever the saint fell ill while he was still on his throne, this blessed prince had a highly skilled Syrian physician named Peter who also came with him to the monastery. When he saw his master in such voluntary poverty, he moved to Kiev, and began a practice of medicine. He often visited the saint at the monastery and continually admonished him to take more care of his health. Moreover, the saint’s brothers had instructed the physician to implore their brother to care for himself, to eat more and to work less. Peter continually strove to make St. Nicholas fast less strictly and to accept gifts, so he would not live in such poverty. ‘If you continue with such a life of deprivation, you will fall ill and die before your time,’ Peter admonished. The saint responded with words from the Holy Scripture, ‘Brother Peter, I have discerned that it is not necessary to be gentle to my flesh, lest it become covetous of the spirit and raise a struggle against me. Let it be humbled and weakened. And if it does become weakened then the Apostle has given us the Lord’s own promise, My grace is sufficient for you: for My strength is made perfect in weakness (2 Cor. 12, 9). The same Apostle said, the sufferings of this present life are not worthy of beeing compared with the glory that shall be revealed in us (Rm. 8, 18). However, this all is impossible without fasting and toil, for fasting is the mother of chastity and purity. It is said, He humbled them in the labour of their heart (Ps. 106, 12). Thus, I thank God that He freed me from worldly work and made me a slave to His slaves, these blessed monks. For, being a prince, I work in a monastic image for the King of kings. Let my brothers worry about themselves, for every man shall bear his own burden (Gal. 6, 5). It is enough for them to have my authority which I forsook in the earthly princedom for the sake of the heavenly kingdom, and I have suffered the loss of all things that I may win Christ (Phil. 3, 8). And why do you threaten me that in my abstinence and labour I might die? For to live is Christ and to die is gain (Phil. 1, 21).

Peter would prepare medicinal herbs and bring them to him. But St. Nicholas never took medicines, and, at times, he would already be made well by God before the physician even arrived. Once, the physician himself fell ill and the saint sent word to him saying, ‘If you do not take your medicines, you will become well in three days, otherwise you will suffer much.’ Peter did not obey and, consequently, he nearly died. Only the prayers of the saint saved him.

Later, the physician became seriously ill and St. Nicholas again sent word, ‘You will be well on the third day if you do not take any medication.’ This time Peter obeyed and recovered on the third day.

St. Nicholas sent for the healed one and said to him, ‘Peter, you should be tonsured into the monastic image and work for the Lord in this monastery together with me; I shall depart from this world in three months’ time.’

At these words, Peter fell at the feet of the saint and began to weep with inconsolable grief. He begged the saint to pray to God to prolong his life. ‘Where shall I go, to whom shall I turn, my prince, if you depart from here? Let me die instead of you and you remain in this life.’

The blessed prince raised the weeping physician and told him, ‘Do not weep Peter; it is good to hope for the Lord, rather than for princes. The Lord knows how to care for His creatures. Let my brothers in the flesh not weep over me, but over themselves, and their deeds in the lamentable valley of this world, that they may be joyful in the future life’.

The saint took the physician to the cave and there they made the place ready for his coffin. Then turning to Peter he said, ‘Which of us loves this place more?’ The other replied with tears, ‘I know that if you wish, you can beseech the Lord that He extend your life, and place me here.’

The saint told him, ‘Let it be as you wish, if this is pleasing to God. Receive the monastic image.’ Soon after that, the physician, upon the blessed friend’s advice, was tonsured and remained in prayer day and night for three months, shedding tears. Then, the saint, comforting him, said, ‘Brother Peter, do you want me to take you with me?’ He replied with tears as before, ‘I wish that you allow me to die for you and you remain here and pray for me.’ ‘Be ready then, brother,’ replied the saint, ‘for on the third day, according to your desire you will depart from this world.’ In three days, Peter, having communed the Divine and Life-giving Mysteries, lay down on his bed and gave up his spirit into the Lord’s hands.

After the repose of the physician, the blessed prince lived thirty more years never leaving the monastery. Having attained a truly holy life, he reposed to eternal peace with all the saints.

On the day of his repose, nearly all Kiev citizens gathered to give him the last kiss and ask for his prayers. Brothers of the deceased saint, Izyaslav and Vladimir, wept for him more than anyone. Izyaslav sent to the abbot and besought him to give him the cross of his late brother, his pillow and a pad for bowing, as a blessing and consolation. The abbot gave the things to Izyaslav saying, ‘According to your faith be a help to you from these things.’

Several months later, Prince Izyaslav fell ill and was at death’s door. The prince’s wife, children and all the boyars were near him awaiting his demise. Having dozed in his bed, the prince raised himself a little and asked for water from the Cave Monastery’s well. When he had said this, he became completely numb and could not utter a word. Water was brought from the Caves along with the hair shirt of St Nicholas Svyatosha sent by the abbot.

When the messenger entered the house with the water and the hair shirt, the prince cried out, ‘Nicholas! Nicholas Svyatosha!’ After the prince drank some water and put on the hair shirt he immediately became healthy and everyone glorified God and His saint. Thereafter, Izyaslav put the hair shirt, on every time he became ill. He willed to be buried in it when he reposed.

By prayers of holy the prince, St. Nicholas Svyatosha, may we too find healing for our bodies and souls. Amen!