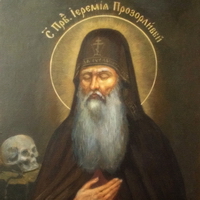 Memorial day on October the 18th

The Lord bestowed His great saint, sagacious Jeremy, upon the lands of Rus’. We do not mean the Old Testament Jeremy, the Prophet of Judea. We mean the great ascetic of the Cave Monastery. It is impossible to determine the exact years of life of the saint; but he was already in older age, when he came to the monastery at its very founding. St. Jeremy accepted the monastic tonsure from Sts Anthony and Theodosius and struggled fervently following their holy guides.

Because of his great virtues and angelic life, the Lord granted Jeremy the rare gifts of prophecy and insight. The saint could see evil thought or sinful intention in other people; he admonished them in private and instructed to resist various diabolical obsessions. St. Jeremy paid special attention to those who considered leaving the monastery and returning to worldly life. In such cases, Jeremy would come to the doubtful brother’s cell, expose his intention, comfort him and exhort him to patience, teaching the monk to stand firm in the struggle with evil and sin. Usually, the saint’s exhortations were so strong that the thought of leaving the monastery never troubled the monk’s mind again.

The prophecies of St. Jeremy on particular situations always proved true. After many years of service, having brought much good and benefit to his neighbours, Jeremy reposed at a very old age. Leaving behind the chamber of his body the soul departed to the choir of holy prophets to stand in direct contemplation of the Divine Wisdom, the source of all the mysteries, Jesus Christ, the Ancient of Days, to Who be glory with the Eternal Father and His Life-giving Spirit, now and ever, and unto the ages of ages. Amen!