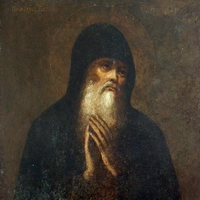 Memorial day on January the 21th

Not only Neocaesarea can boast of Gregory the Wonderworker; the namesake of that saint has glorified the holy Cave Lavra.

The blessed youth came to the caves during the time of St. Anthony’s recluse. He was received and tonsured by St. Theodosius who was then building the monastery. The saint elder taught young Gregory of non-acquisitiveness, purity, humility with obedience and other virtues. The young monk was especially diligent in prayer. The saint purified his soul and God made him worthy of acquisition of the Holy Spirit and of the gift of wonder working for his great struggles. God gifted him the power over demons who did not even dare to approach the saint. They cried out to acknowledge his victory at a distance.

Because of those gifts, Satan had a special malice for the saint and often aroused evil people against him. Some sacred books, quite valuable at that time, were the only possessions of the saint. By the inspiration of the evil-one, some thieves entered the saint’s cell and hid. They planned to steal the books and escape with them while the brethren were at the morning service. The saint, however, realized that they were present and he did not rest for the entire night, but stood in the middle of his cell praying. Then wishing to bring the thieves to repentance the saint prayed, ‘Oh God, give sleep to Thy slaves who have come here in vain at the behest of the enemy.’

The thieves fell into a deep sleep. They slept for several days until the brethren awakened them, fed them and admonishing them for the salvation of their souls sent them home. The governor of the city heard about the incident, and had the thieves arrested and sentenced to tortures. St. Gregory was deeply upset that the thieves suffered on his account. He hurried to intercede for the thieves and obtain their release. The saint sold the rest of his books and gave the money to the poor saying, ‘No one else will fall into trouble by wishing to rob me.’

The thieves came to the monastery by repentance. They worked for the brethren. Later, however, some other thieves approached the saint in order to deceive him. ‘Father, our friend here has been condemned to death. Can you give him something that might help him buy off his sentence?’

The saint saw in spirit that their falsehood would come true. He wept saying, ‘Miserable is this man, for the day of his death has come.’ ‘Father! If you give him something, he will not have to die’.

The wonderworker replied, ‘Even if I give you what you ask he will all the same die. Tell me what kind of death has he been condemned to?’

They replied, ‘He will be hung on a tree.’

‘You have judged well,’ said the prophetic saint, ‘for tomorrow it shall be so.’

Having said this, the saint went into the cave and returned with a book handing it over to the deceivers.

The three departed laughing at the saint’s gullibility. As they passed the monastery orchard, they noticed the ripe fruit on trees and decided to come back at night and steal the fruit.

With the approach of night, the thieves came back. At that time, St. Gregory was praying in the cave. The thieves barred the outer door of the cave and one of them climbed up on the tree to throw the fruit down. Suddenly, the branch he was holding on to, broke. He began to fall, his head was trapped by another branch and he choked to death. The other two fled in terror.

Meanwhile, St. Gregory, locked in the cave, could not come to the church for the morning service. After the service, the brethren set out to look for the saint. When passing the orchard, they noticed the dead man hanging on a tree. In horror, they came to the cave, unlocked it and found the elder. As he came out of the cave, he ordered that the dead man be removed from the tree. In the crowd of watchers, he saw the two friends of the unfortunate one. The saint elder addressed them, ‘See how your accursed falsehood came true; for God is not mocked (Gal. 6, 7). If you hadn’t locked me up, I would have come and helped him and he would not have died.’ The two fell at the elder’s feet and repented. The saint instructed them to work at the monastery, earn their living, and help feed others too from their toils.

The following details are known concerning the repose of the saint.

It once happened that an unclean animal polluted one of the monastery containers, and the elder took the vessel to the Dnieper River to wash it. As he was at the water, Prince Rostislav Vsevolodovich was coming by. At that time, he and his brother, Vladimir Monomakh, were preparing for a defensive war against the Polovtsians’ invasion, and he was going to the Cave Monastery for prayers and blessing. Some of Prince Rostislav’s servants came upon the saint and, for some reason, began mocking and making fun of him. The elder foreseeing in a prophetic spirit that the hour of their death was near said to them, ‘Oh children! You should ask everybody for prayers instead of doing evil, which is displeasing to God! Weep over your coming death and repent of your sins in order to receive joy on the Judgement Day for it is coming soon for you. You all will be drowned in water together with your prince.’

Having heard that, the prince accepted the saint’s words as a reproof rather than a prophecy. He became very angry and said ‘Are you foretelling death by water for me? I can swim well! You yourself will meet this death.’

Immediately, having no fear of God in his heart, he ordered that the elder be bound hand and foot, a stone tied on his neck and the saint cast into the Dnieper. Thus, the saint drowned. The brethren searched for him for three days but could not find him. On the third day, they came to his cell. There they found the saint, dead, tied hand and foot, his clothing still wet but his face bright and peaceful. Everyone was amazed at the miracle: how and who could have taken the body to the locked cell? The brethren carried over the wonder working relics and placed them in the caves where they remain untouched to this day.

Rostislav, meanwhile, did not go to the monastery but, breathing fury, departed without a blessing. His brother Vladimir, however, went to the monastery, asked for prayers and received a blessing from the brothers. During the battle of Tripolie, while crossing the Stugna River, the Polovtsians defeated the princes. Vladimir escaped but Rostislav and his retainers drowned in the Stugna River.